Skip to content
Posted on May 25, 2014January 26, 2017 by Sylodium Posted in bilateral trade, China USA trade, Chinese business, comercio entre países, connecting cities, connecting countries, trade between countries, USA China trading
INTERNATIONAL TRADE.
If you want to import export from China to USA, or from USA to China
use www.sylodium.com

The best (the only?) way to export in Internet.

1.)- Is international trade a complex system (game) or simple goings among countries?

For other directories, it is a map of isolated drawers (country and city), not even a goings. 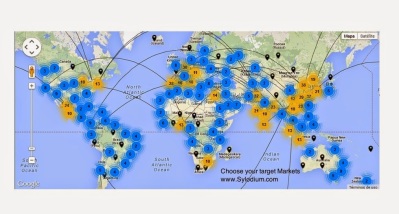 3.)- multi-lateral initiatives, like WTO, are failing, as trying to agree 123 countries on a new set of rules for international trade is impossible.
4.)- John Austin: The international law is not a real law “International law is the result of the relations of power between all the governs of all the states”
5.)- 47% of the population of the world is rural. In Latin America the 21%, in CIS 40%. (www.wto.org)
6.)- CIVETS, BRICS, N-11…..The world is fragmented into competing trading blocs (EU in Europe, ASEAN in Asia, NAFTA in America, GCC in Middle East, CIS, SADC…) and many others more or less overlapping, so if somebody try to inform about international trade to not expert people, news must go mixed with basic information.
7.)- Africa is working in creating a unique bloc from the African Union.
8.)-The Most ambitious multilateral FTA plans are
a)- The TTIP (US – EU). The West will try to recover part of its dominance lost.
b)- The TTP (Australia, Brunei, Chile, Canada, Japan, Malaysia, Mexico, New Zealand, Peru, Singapore, the United States, and Vietnam)
US is playing in both agreements and Mexico is trying to do the same.
If you want to promote your business globally for FREE all times via our City and Country / crossing system. Choosing your target markets. All that you desire.

https://www.youtube.com/v/xdGAvsS6k6A?version=3&f=user_uploads&c=google-webdrive-0&app=youtube_gdata
Choose your target markets
TOP positions for your ads in Google,

You’ll be seen by people you want to be seen.